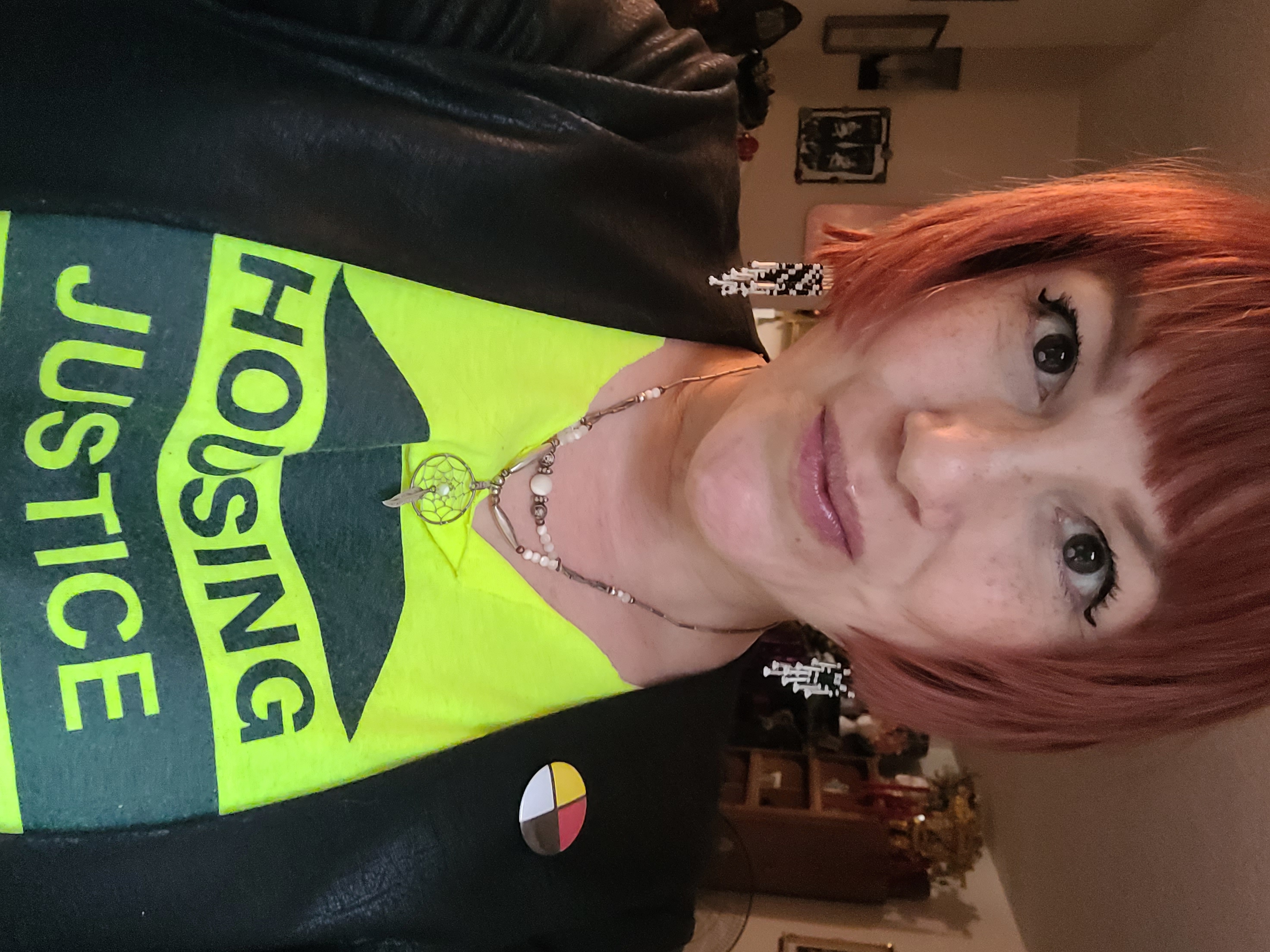 Tanya Webking is a COPE candidate for Vancouver City Council candidate. Join COPE to help elect Tanya and all the other COPE candidates by signing up here.

My name is Tanya Webking and I’m Dene/German from the Tlicho Nation. I began working in the Downtown Eastside of Vancouver 25 years ago. I have a background in mental health and addiction issues, counselling, advocacy, mediation, research, and grassroots community organizing. Currently I’m the Indigenous Health Promotion Case Manager at AIDS Vancouver and I am also co-chair of the City of Vancouver’s Renters Advisory Committee.

As I don’t recognize colonial borders, I'm still organizing in Washington State as the first Indigenous Board Chair for the Tenant's Union of Washington State. I’ve been involved in grassroots community work all over Coast Salish Territories, focusing for the past several years on tenants rights and anti-poverty work. I was a founding member of the Tacoma Tenants Organizing Committee where we got seven pro-tenant laws passed in seven months through grassroots organizing.

We need to build collective power in this election year so that we can get progressive representation on City Council and pass progressive policies. We live within a colonial paradigm where all systems of power are imbalanced. Through my work in the Downtown Eastside, I witness the direct effects of colonization every day. Indigenous systems of community tell us that no one should be uncared for. It’s time to move from empty land acknowledgments into systemic changes that break down colonial systems of power – for decolonizing to move from theory to action.

In this city that calls itself the “City of Reconciliation”, Indigenous voices should be at the table for these conversations and need to be coming directly from the city council. The “advisory member” model is just colonial gatekeeping, as advisors hold no power. I look to uplift the principles of equity, inclusion, diversity, intersectionality and trauma-informed care in all of my work and I would love to represent COPE for City Council.

I love that COPE is a grassroots-led organization that champions equity driven policies and that truly pushes for change. I support COPE’s guiding principle of caring for people over profit, and COPE’s priorities of ending homelessness, defunding the police, and real reconciliation.

Land reparations and the fight to end homelessness starts when decolonizing housing begins. We have corporations that have profited millions on these unceded territories, yet have failed to pay land reparations. It’s time to make that happen.

Like Jean has been trying to do on Council, we need to defund the police and refund our communities. The ongoing and continued colonial violence on our Indigenous communities is widespread. MMIWG2S and attacking land defenders while protecting banks is colonial violence. We need a budget that reflects real reconciliation and the needs of our diverse community.

I’ll continue to support and uplift the voices and ideas from the original stewards of these lands, the Musqueam, Squamish and Tsleil-Waututh Nations and I’ll push for designated City Councillor positions for each First Nations community. Reconciliation is a journey, not a destination.

My dad wrote the Equality Rights component to our Charter of Rights and Freedoms. As a second-generation grassroots organizer, I want to push for Vancouver to add “Housing as a Human Right” into the Vancouver Charter. Toronto’s done it, we can do it too.

As an Indigenous woman and a tenants rights organizer, housing and homelessness are my primary issues.

Affordable housing must be addressed, particularly as the minimum wage in Vancouver doesn’t meet a living wage standard. We need to protect the affordable housing stock currently available. Rent goes up every time a tenant moves, and tenants never find housing in that same budget bracket again. Through this process, approximately 20,000 apartments per year convert from affordable into unaffordable housing. To slow down this tenant displacement, we need city-wide Vacancy Control and stronger tenant rights provincially.

Decolonizing housing means housing for all. In a ‘City of Reconciliation’, we need to eradicate homelessness with creative land back reparations and some serious reallocation of our tax dollars. Due to the colonial history of attempted genocide of Indigenous Peoples and the residential school system, the city needs to remove property tax exemptions on all churches and directly allocate those funds towards decolonizing housing and eradicating homelessness. 40% of the homeless residents in the downtown eastside are Indigenous, and the overdose crisis is taking seven lives a day. Where is the reconciliation effort?

Toxic drug overdose rates have gone up over 400% in the past seven years. Toxic deaths went up in Vancouver by 26% over previous records, while our HIV rates in Vancouver are over six times the national rate. We have intersecting pandemics in Canada’s largest urban reservation and we need a response with equal force. We need trauma informed care and practices. Housing is a social determinant of health; housing is healthcare.

We’re in the most critical housing crisis of our lives. We’re well past land acknowledgements. and it is time for action around decolonizing housing and getting senior levels of government involved. We can build green social housing, with unionized jobs to strengthen our community and economy, but the city must go after provincial and federal funds. We could eradicate homelessness within two years through green modular housing, while also aggressively expanding the social housing requirements in the Broadway Plan and in the Vancouver Plan. No one should live without a home in a city of such wealth, particularly wealth that was created on unceded territories.

My second priority is defunding the police and giving the care back to the community. Reparations must include addressing systemic racism within policing and transitioning to a community-led model of safety. VPD spent over $3 million fighting protestors last year, and they’re planning on increasing that portion of the budget. The majority of protests are non-violent, Indigenous, land protectors, while VPD protects banks. We can build back vital social safety nets that have been slowly eroded over the past 20 years and begin conversations about community safety programs.

Lastly, I would love to see decolonizing efforts at City Hall. Indigenizing spaces is more than art – it’s also about taking up emotional spaces and honouring our traditional ways. I would love to advocate for a Sacred Bundle Carrier at city hall, following Coast Salish protocols. We’ll need seasonal feasting ceremonies for the bundles.

Another place for reconciliation and indigenizing spaces is around a particular holiday. Thanksgiving Day has historically been associated with colonization and of the attempted genocide of all Indigenous Peoples on Turtle Island, so I would like Vancouver be the first city in Canada to declare Thanksgiving Day as Potlatch Day. It’s the perfect local tradition to take its place and to celebrate sharing of food and wealth amongst family and community. Sharing and learning is true reconciliation.

It’s time for an Indigenous-led revolution.

Mahsi cho for your consideration. All my relations.