Motion to Start the Process of defunding the VPD

By the morning of July 7th, 222 people had signed up to speak to this motion. However, the Council meeting abruptly ended before getting to this motion as well as another motion that aims to stop street checks, due to NPA councillors who are married to police officers filibustering. Both motions are now referred to the July 21st council meeting. On the bright side, this means speakers can still sign up to speak once the agenda for the 21st meeting is released (around the 15th) and emails can be sent on an ongoing basis until a decision is made. If you're not on COPE's mailing list, use this page to sign up so you receive the future update about this issue.

COPE Councillor, Jean Swanson, is bringing a motion to City council on July 7, 2020, that if passed, makes clear the amount of money the Vancouver Police Department spends policing issues such as mental health, substance abuse, sex work, homelessness, and poverty. By examining this spending we can take the first step in an evidence-based approach to redistributing these much-needed funds to appropriate community-led services, and defunding the over-policing of poor and racialized communities in Vancouver. Please sign up to speak or write to council to support this motion. Keep reading to find out how.

A link to the complete motion can be found here.

The VPD budget has grown by more than $100 million in the last 10 years, for a total of $340 million in 2020, while real tangible solutions to poverty and homelessness have languished on the drawing board for a lack of funds. 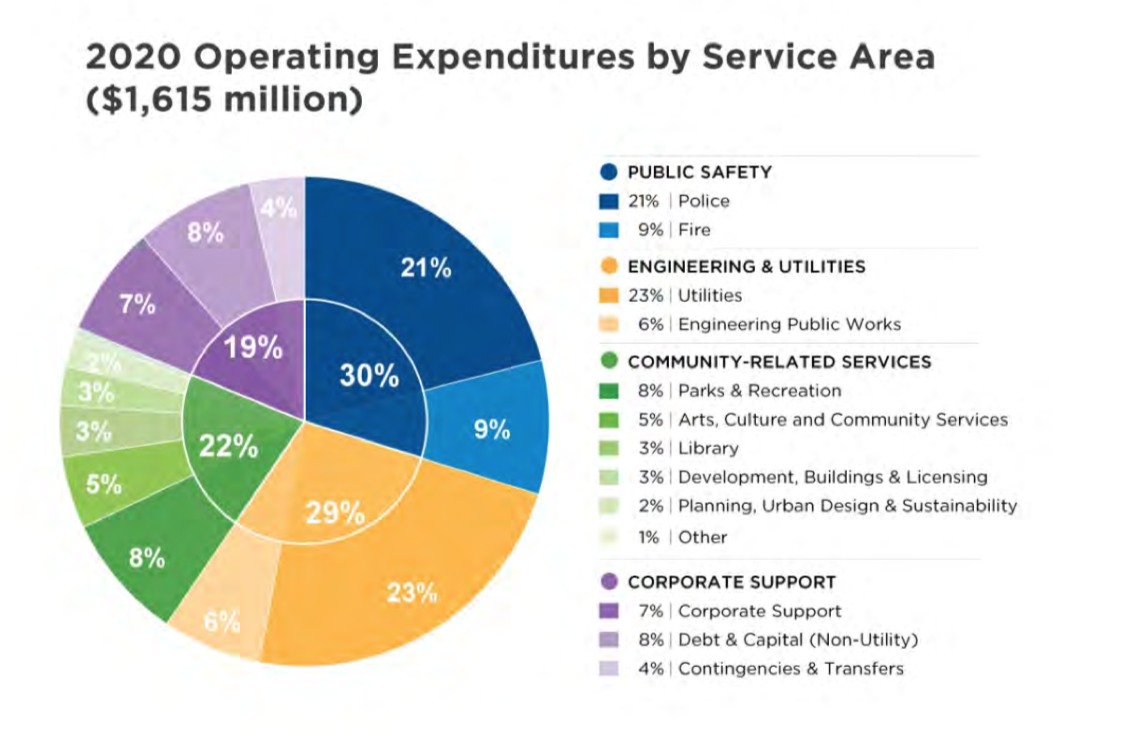 Above is a Distribution of the City's Operating Budget from the 2020 Budget Document. The growth of the policing budget has greatly outpaced population growth in our city. Our goal must be to carve out some of that budget and treat the cause, not the symptoms, of poverty.

What You Can Do:

Write to the Mayor and Council and let them know you care about the issue.

This link allows you to write a message to Councillors.

Make sure you state at the top whether or not you support this motion. In the "Feedback Subject" mention Motion B.4 and at the top of your comments state that you support the motion. Sometimes they don't read the full message. Important: Also be sure to ask that NPA Councillors Kirby-Yung and Degenova, who are married to police officers, recuse themselves from voting on the motion in order to avoid conflicts of interest. You can also send individual messages to the mayor and councillors. See this page for contact information for all councillors and the mayor.

On this page, you can access some an email template prepared by UBC Social Justice Centre, for sending emails in support of the motion, and here is a more thorough fact sheet on this issue that can help with preparing your speech, also prepared by the SJC folks.

Due to COVID this is done by conference call, although you can go to City Hall in person if you prefer. Signup to speak here before 9am on July 7th.

Speaking in favour of the motion puts immense pressure on council to defy overwhelming numbers of voices urging them to do the right thing.

Our Motion is B4: Decriminalizing Poverty and Supporting Community-led Safety Initiatives, be sure to check this motion. you will be asked whether you support or oppose the motion. Typically speakers are heard the day AFTER the motion is introduced so that would be Wednesday.

Share this page with people you know who feel the same way, ask them to let City Hall know how important this issue is and how much we want it solved as soon as possible.

freeze the rents and tax the mansions #vanpoli