We all know that Vancouver is in a housing emergency. The average 1-bedroom now rents for $2,100, over 2,100 people have been counted as homeless, and many more renters are at risk of eviction onto the streets or out of the city.

Enough is enough. It’s time to treat this crisis seriously and to implement policies that match the seriousness of the crisis.

COPE has a plan. A realistic plan for its first months in office. If elected, COPE councillors will introduce a motion to declare a “Housing State of Emergency” and a series of major policies to protect renters, end homelessness, and kick-start a program of non-market housing construction. 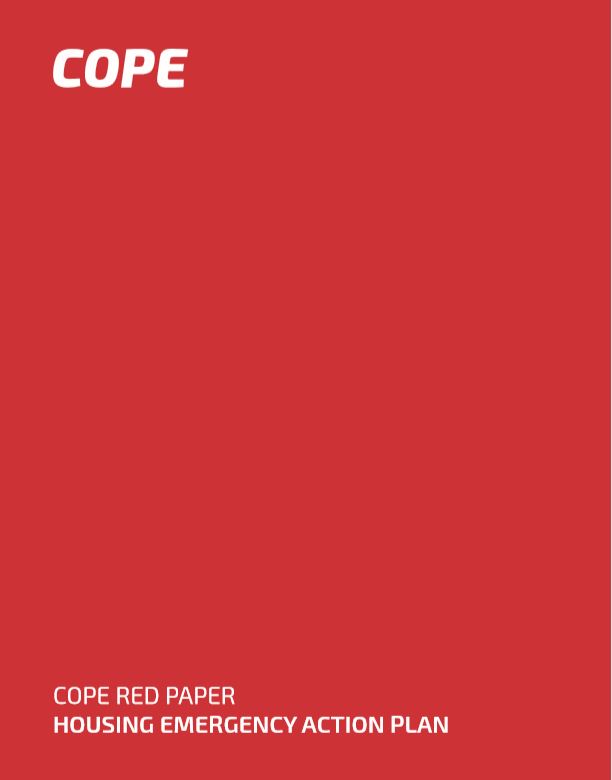 COPE will introduce a motion calling on the mayor and council to support a city-wide Rent Freeze by establishing a cross-party Renter Protection Committee to advocate for the provincial government to set the maximum allowable rent increase at 0% for the next four years across BC and for the province stop landlords from increasing rents between tenancies.

The Renter Protection Committee will also work with city staff to determine how to best use city tools, including landlord business licenses and the Tenant Relocation and Protection policy to freeze rents during and between tenancies in Vancouver. The committee will work to set up a landlord registry which will track rents in all rental units across the city to help enforce the intent of the Rent Freeze.

COPE will also introduce motions to ban renovictions immediately. Thousands of renters are under threat of renoviction in Vancouver right now. The city issues renovation and development permits, so the city can require that landlords cover tenants’ moving costs and allow tenants to return to their homes at the same rent. This will nip many renovictions in the bud. At the same time, COPE will extend tenant protections across the city. It’s unconscionable that renters in 2/3rds of the city are not covered by the city’s Tenant Relocation and Protection policy.

COPE’s actions to end homelessness -- for real this time

It’s essential that Vancouver redoubles its efforts to end homelessness. Homelessness was created by bad policies, and it can be fixed with good policies.

COPE will seek a unanimous vote of the mayor and council to pledge an end to homelessness in one year. That will mean the city will commit to building modular housing for everyone without a home --  2,100 homes completed within one year. The recent modular housing at the Olympic Village was built in only 9 weeks.

This means that the city has to get serious about new sources of revenue: the Mansion Tax. COPE will introduce motion to ask the province to give the city the power to implement progressive property tax on the value of mansions over $5 and $10 million. This is a reasonable demand, given that the province created progressive brackets on its portion of property taxes (the School Tax), and that the city was recently given the power to implement the COPE’s vacant property tax (the Empty Homes Tax).

COPE will work to set up a cross-party committee of council whose first step will be to seek the provincial housing funds we need. At the same time, COPE will ask for the expanded taxing power to raise sufficient funds. COPE will also direct staff to identify land and budget to build enough modular housing to house all counted homeless people within one year, including by using assets in the city’s Property Endowment Fund. We’ll also immediately instruct city staff to find the funds to fill the former mayor’s promise that the social housing at 58 W Hastings be rented at 100% welfare/pension rates.

Vancouver has been losing a significant portion its low-income stock -- single-room occupancy hotels -- to shocking disrepair and to gentrification. This is directly causing homelessness. COPE will direct staff to enforce Section 23.8 of the Standards of Maintenance bylaw in SROs that allows the city to do necessary work and bill the owner, while also working to renovate or replace all 3,500 SRO rooms with self-contained homes through VAHA, including by using compulsory public purchase.

COPE’s actions to build the non-market housing we need

COPE will move immediately to begin construction of non-market housing. Over 30,000 households are currently spending over 50% of their income on rent. We’ll establish a goal of 30,000 new non-market homes over the next six years, or 5,000 per year.

COPE will Introduce a motion to re-examine the mandate of the city’s Property Endowment Fund and new Housing Fund. COPE’s aim is to establish a mandate for the fund that gives priority to the social and housing needs of city residents, not making a financial profit. The city needs to use these abundant resources to ensure that low-income renters are not priced out of social housing because of lease rates and city conditions.

Vancouver’s housing emergency is also affecting co-ops. COPE will re-assign staff from the city’s real estate section to create a Co-op Housing Action Team to develop in-house expertise to building and maintaining publicly owned co-ops. Their job will be to renew new existing co-op leases within the first year, ensuring co-ops are affordable for low-income people, and to obtain federal and provincial revenues by working with CMHC and BC Housing and other agencies. They’ll also work with Musqueam, Squamish, and Tsleil-Waututh Nations to use Mansion Tax revenue to support First Nations housing land trusts.

To ensure that new rental housing construction is affordable for Vancouverites, COPE will direct staff to bring to council a report that outlines how the city can use new “rental-only zoning” powers to protect existing tenants, avoid gentrification, provide housing that’s affordable for low-income people, and extract wealth from any upzonings.

Finally, COPE will introduce motions to change the definition of “affordable” to mean less than 30% of an individual’s income. COPE will also ensure that new non-market housing is affordable for households earning under $50,000 per year.