Today COPE released its list of financial contributors from the first eight months of 2022, showing that there have been 768 unique donors contributing an average amount of $136 and a median amount of $40. Overall, COPE raised $104,559.20 between January and August, 2022.

"COPE’s campaign for rent control and a mansion tax to end homelessness is funded by working-class residents," said COPE city council candidate Nancy Trigueros. "That’s reflected in the fact that the median COPE donor gave $40, and that 89% of COPE donors gave under $250."

COPE’s major competitor, Ken Sim’s party, published their list of financial contributors on August 30th, 2022 [see spreadsheet version here]. The list published by Sim’s party disclosed a total of 550 unique donors in 2022 — fewer than COPE. However, the list showed that in 2022 the average donor contributed $809 and the median donor contributed $1,200. 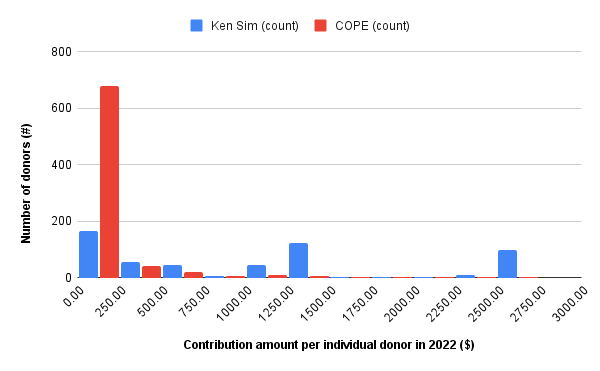 Figure. COPE vs. Ken Sim: Number of unique donors by total amount of financial contribution to party in 2022

Are corporations interfering in the Vancouver municipal election by organizing maximum contributions to parties?

Last week, COPE received by mail three political contribution cheques of $1,000 each, drawn on the accounts of three different people, and all of which were contained in a single envelope with the Concord Pacific logo, the Concord Pacific Head Office as the return address, and postage issued by a Canada Post postage meter printer (traceable back to a specific Canada Post customer).

COPE did not deposit or cash these cheques. Instead, in a letter to Elections BC on September 7th, 2022, COPE requested clarification “about whether these cheques violate the Local Elections Campaign Financing Act” and requested that Elections BC “conduct a forensic audit of the company and the individuals who made these campaign contributions.” Elections BC has not yet replied to this letter from COPE.

On September 9th, 2022, the Vancouver Sun reported that an Elections BC spokesperson commented that “there does not appear to be a contravention of the Local Elections Campaign Financing Act”.

The Sun also reported that a Concord Pacific spokesperson stated that the contributors in question “are employees of our consultants."

A further statement from Concord Pacific added: “Other companies have sold tickets to dinners and private events to raise money for a specific party or candidate. Concord has decided not endorse or support any one party or candidate. We encouraged our consultants, vendors and friends to participate in this civic election process and by donating to some or all parties of their choice. We received three personal cheques made out to COPE that we forwarded.”

The Sun also reported that “Two of the three names on the cheques received by COPE also appear in other parties’ campaign finance disclosures.” One of them contributed the maximum of $2,500 to Ken Sim’s party.

“The people of Vancouver and BC deserve to know whether companies are using their employees and contractors to make illegal campaign contributions,” said Breen Ouellette. “Elections BC must use all available tools to investigate Concord Pacific and the people who issued these cheques. We will only receive the answers that our democracy deserves with a thorough investigation into the financial statements, bank records, and communications of the parties involved.”

“How many other political parties received cheques sent directly to them by corporations?” asked Jean Swanson. “We’re calling on all parties to disclose which of the donations they’ve received came from fundraising events or envelopes organized by corporations.”

“The latest statement from Concord Pacific suggests that they are aware of other companies raising money for parties and candidates,” added Nancy Trigueros. “Whether these fundraisers break the letter or the spirit of the law, corporate election fundraisers should not be happening at all.”

“A provincial commission of inquiry must also investigate these new claims by Concord Pacific and determine exactly how deep this problem goes,” said Tanya Webking. “The integrity of our democracy demands it.”