Send a letter to Parks Board: Support an Indigenous Healing Lodge at CRAB Park 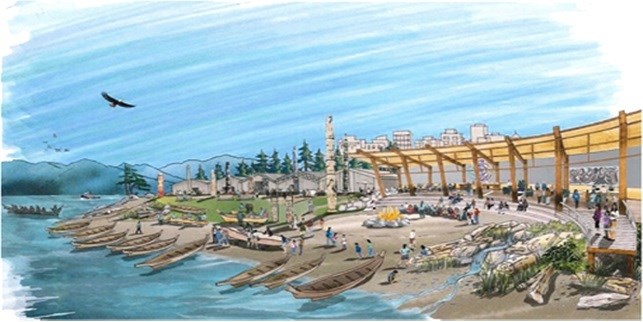 For decades, indigenous elders, leaders, and the residents of Vancouver’s Downtown Eastside have talked about a First Nations Healing Lodge on the waterfront next to CRAB Park. This dream never seemed like it could become a reality, until in 2019 COPE Commissioner John Irwin and Councillor Jean Swanson with the support of the community started the process for the Parks Board and City Council to invest in bringing it to life.

A motion by Commissioner Irwin is coming to Parks Board on Monday night, July 19, asking the Parks Board and the City of Vancouver to approve capital funding for this important project. This is the most crucial step in the process. We believe that our tax dollars should prioritize indigenous communities, not landlords and developers. It is on all of us, in the spirit of reconciliation and returning stolen land to its original caretakers, to get behind this project and show up for support every step of the way.

Take 5 minutes TODAY to send an email to Parks Board Commissioners and in your own words let them know why they should vote for this motion and advocate for the materialization of the project. Personal letters in your words have the strongest impact.

Send your email BEFORE MONDAY EVENING to:

Once you're done, send this page to 5 of your friends and ask them to do the same!

-A healing lodge was part of the 1982 vision of the Founders of the Aboriginal Front Door Society and the CRAB Water for Life Society, who occupied the waterfront in tents to Create a Really Available Beach (CRAB).

-In 2000, Western Aboriginal Harm Reduction Society (WAHRS) founders incorporated the healing centre at CRAB Park into the city’s visioning for the Woodwards’ District

-In April 2019, the Port on the Central Waterfront, near CRAB Park, gave itself permission to expand the central port, and community members failed to halt the expansion.

-In May 2019, Parks Board adopted a motion by COPE Comissioner John Irwin about a possible 4 acre westward expansion of CRAB Park that considers a healing lodge on the site.

- In July 2019, City Council upheld the Parks Board decision by adopting a similar motion proposed by COPE Councillor Jean Swanson to advocate for and facilitate the expansion of CRAB Park and establishing of an Indigenous Healing Lodge.

- In February 2021, Union of BC Indian Chiefs (UBCIC) adopted a motion to call upon the City of Vancouver, the Vancouver Park Board and the Vancouver Fraser Port Authority to work with local Host Nations and Indigenous organizations to establish an Indigenous healing lodge at CRAB park.

- In July 2021, COPE is asking the Park Board and the City to approve funding for this important project.

We have never been closer. Let's keep growing the momentum and the movement together!

freeze the rents and tax the mansions #vanpoli