COPE will appoint an Independent Rep. for IWG2S people in Vancouver 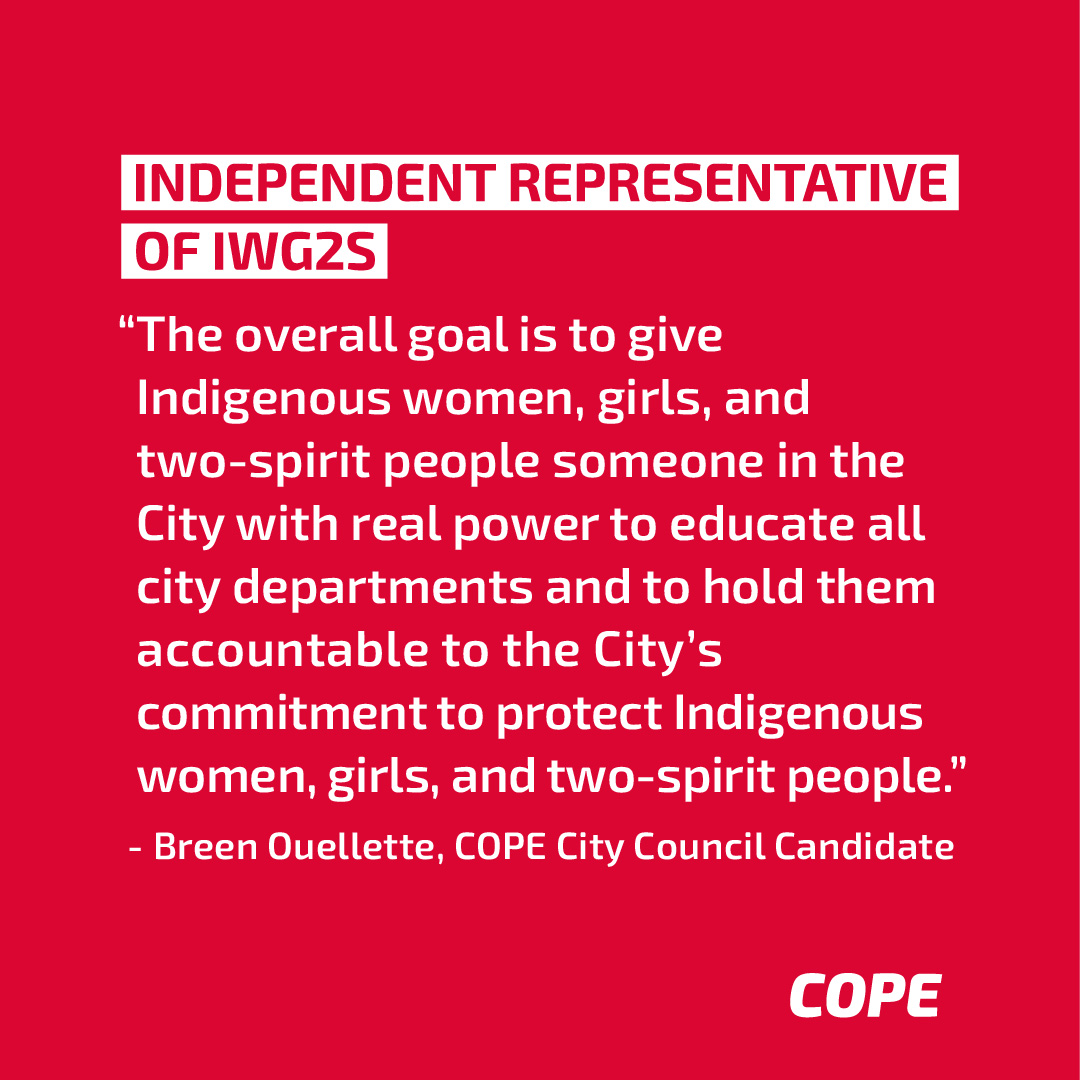 COPE Vancouver City Council candidate Breen Ouellette announced today that, when elected, he will put forward a motion for the appointment of an Independent Representative of Indigenous Women, Girls, and Two-Spirit People (“IWG2S”) for the City of Vancouver.

A Vancouver-based lawyer and Métis person originally from Saskatchewan, Ouellette was a Commission Counsel lawyer for the National Inquiry into Missing and Murdered Indigenous Women and Girls, and a consultant on the IWG2S Coming Home report delivered to the City of Saskatoon last year. The report was commissioned to determine how that city could best implement the 231 Calls for Justice of the National Inquiry. Breen worked directly on the report’s recommendation for the appointment of a Representative of Matriarchs for IWG2S reporting directly to Saskatoon City Council. The City of Saskatoon has since allocated Phase 1 funding to proceed with implementation of the proposed independent representative.

Similar to the City of Saskatoon’s model, a Representative of IWG2S for the City of Vancouver would be introduced in three phases. Phase 1 selects the first Representative and empowers her to hire office staff and collaborate with every department of the City to develop education and training materials directing best practices in support of IWG2S. Phase 2 empowers the Representative to augment and implement crisis intervention services to protect Indigenous women, girls, and two-spirit people in crisis or on the verge of it. Phase 3 empowers the Representative to investigate complaints of harm to IWG2S by any City department, with her findings and recommendations delivered directly in regular public reports to City Council.

Many of the issues faced by Indigenous women, girls, and two-spirit people engage intersectionality. As an independent officer of City Council, the Representative would address harms to IWG2S holistically, allowing sustainable, systemic solutions to be identified and implemented Vancouver-wide by every department of the City.

While Vancouver’s Independent Representative for IWG2S would be only the second of her kind in Canada, the City of Saskatoon IWG2S Coming Home report recognizes that independent accountability officers are an established government accountability mechanism, with a proven track record of addressing harms to vulnerable groups and working toward community-led solutions. A phased approach has been proven successful by other levels of government in Canada, as evidenced by the Office of the Human Rights Commissioner of British Columbia, who developed her team, office, resources, and powers in a similar progression of phases.

On July 19, 2022, Vancouver City Council voted unanimously to approve proposals from an advisory committee presentation on the MMIWG2S Response Report and Recommendations. One of the approved proposals stated that “Council direct staff to develop a cross-departmental implementation plan and a community-led evaluation plan to advance the directions in the MMIWG2S Response Report; including a financial and delivery strategy that considers funding/delivery options and trade-offs that can be reviewed as part of the next budget process.”

The Independent Representative proposed by Ouellette will be a cornerstone of the City’s cross-departmental implementation plan.

“As the self-proclaimed ‘City of Reconciliation’, Vancouver has an obligation to empower Indigenous matriarchs to protect all Indigenous women, girls, and two-spirit people in our city,” said Ouellette.